If you have information disclosing violations resulting in a successful prosecution and the U.S. obtains monetary sanctions from a wrongdoer, you may be eligible for a whistleblower reward.

Since 1988, our law firm has been representing the brave and heroic whistleblowers who have exposed frauds. This includes Bradley Birkenfeld, the IRS whistleblower behind one of the largest tax fraud cases in world history, who received an IRS whistleblower reward of $104 million. This case and many others like it follow a similar story – the whistleblower came to us for representation and a whistleblower informant award, and we won.

In close partnership with our U.S. and international anonymous whistleblowers, we help save billions of U.S taxpayer dollars by uncovering massive wrongdoing, cheating, and injustice. We stand next to our clients with over 30+ years of deep experience in whistleblower reward law; we know the law so well, we even helped the SEC and IRS write the rules on whistleblowing.

If you’re a U.S. citizen or foreign national who knows of violations resulting in successful prosecution, where the U.S. government obtains monetary sanctions, please get in touch with a whistleblower reward lawyer at Kohn, Kohn & Colapinto.

What is a Whistleblower Informant Award?

Simply put, a whistleblower informant award is generally a percentage given to a whistleblower for their brave and ethical action of reporting a violation of a specific act. The award (or reward) amounts differ, depending on the type of violation you’re reporting. No matter what, if your information leads to successful prosecutions under key anti-fraud laws, it’s absolutely mandatory for the government to pay you a reward.

The small, but fierce law firm of Kohn, Kohn & Colapinto can help you every step of the way — to help you collect evidence, properly file legal documents, work with government officials, and litigate if called to do so.

What Types of Whistleblower Rewards Are There?

Those who report violations of certain acts are eligible to submit a claim to receive a whistleblower informant award. However, those filing claims should know that federal and state law have their own rules and regulations governing a request for a reward. These procedures are extremely technical and failure to file a timely claim following the specific procedures outlined in each law can result in an otherwise qualified whistleblower losing his or her claim to a reward.

If you’re a U.S. citizen or foreign national who knows of violations resulting in successful prosecution, where the U.S. government obtains monetary sanctions, please get in touch with a whistleblower reward lawyer at Kohn, Kohn & Colapinto.

How are Medicare Whistleblower Rewards Paid?

The various types of Medicare or Medicaid frauds include:

Getting the government to pursue a Medicare or Medicaid case requires a substantial amount of evidence. Those who have worked as an employee under the entity they are reporting have the best chances of success, because of their intimate knowledge of a particular fraud scheme. If you know of fraud and can prove the fraud, the government must pay a huge reward, provided you strictly follow the rules governing qui tam cases.

The Environmental Protection Agency (EPA) does not directly provide rewards to whistleblowers who report violations. With enforcement from federal and state agencies, they can however issue fines for pollution and other types of environmental damages. In addition, if a whistleblower knows of crimes against the environment, including illegal fishing, illegal logging, and wildlife trafficking, they may be eligible for a substantial reward under the False Claims Act, the Commodity Exchange Act, and Foreign Corrupt Practices Act, all of which have whistleblower provisions that can be used to combat criminal activity.

All major wildlife trafficking laws, laws prohibiting illegal lumbering, and laws prohibiting illegal, unreported, and unregulated fishing have reward provisions. These laws include the Endangered Species Act, the Lacey Act and laws covering fishing administered by NOAA, the National Oceanic and Atmospheric Administration. Unlike the False Claims Act and similar reward laws, the Endangered Species Act, Lacey Act and laws protecting fish are discretionary. Awards under these environmental and wildlife protection laws are paid by the U.S. Fish and Wildlife Service and NOAA Fisheries.

Another law available to environmental whistleblowers is the Act to Prevent Pollution from Ships (APPS). The APPS incentivizes the reporting of pollution on the high seas. The law permits federal courts to pay whistleblowers up to 50% of any sanction obtained by the government for illegal ocean pollution on the high seas. The courts have awarded millions of dollars in awards to non-U.S. citizens working as seamen on ships. These ships are usually non-U.S. owned ships, “flagged” outside the United States. The APPS law has transnational application.

Anyone who witnesses an environmental violation should immediately contact an experienced whistleblower attorney. The facts of the case must be carefully screened to determine if the violation is covered under an effective whistleblower reward law.

The Occupational Safety and Health Act (“OSHA”) does not provide any awards to whistleblowers. Thus, employees forced to work in unsafe conditions during the coronavirus pandemic are not entitled to any awards for reporting violations under OSHA.

However, violations of worker, patient, or public health and safety laws may be covered under powerful award laws such as the False Claims Act or the Dodd-Frank Act. The False Claims Act has been successfully used in numerous cases where the quality of medical care is at stake. Likewise, the SEC has already taken numerous enforcement actions against companies based on violations related to COVID-19. The False Claims Act and the Dodd-Frank Act have among the best award laws. These laws provide employees with an opportunity to obtain a whistleblower reward for reporting violations and also protect them with strong anti-retaliation provisions. They all set minimum payments to those who come forward with information at the risk of losing their jobs or suffering other damages.

Due to the weak nature of the OSHA protections and other labor laws, it is advisable to talk to a whistleblower reward lawyer. Unlike the OSHA provisions, qui tam whistleblower laws have a private right of action. Reward and qui tam laws can be very effective at providing compensation to whistleblowers and protecting workers that report underlying violations.

What are the fees for hiring or to hire a whistleblower reward lawyer? The Department of Justice (DOJ) Confidential Informant (“CI”) Whistleblower set the record for the largest “related action” award in history, a total of $92.9 million. The award determination described the DOJ CI Whistleblower as a “high-level manager” who shared “very confidential information” to “assist the DOJ,” resulting in significant sanctions arising from the large corporate criminal enterprise. 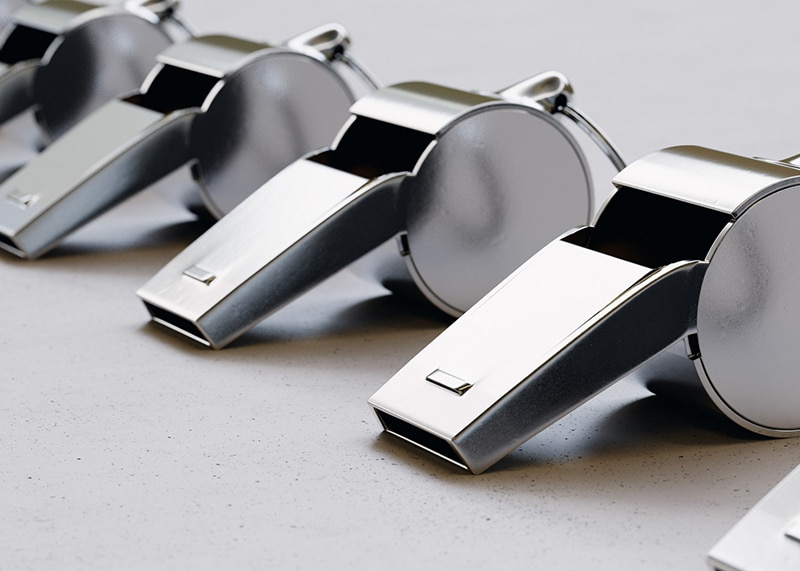 SEC DODD-FRANK ACT CONFIDENTIAL INFORMANT. Protecting the confidentiality of Wall Street whistleblowers is among the most important breakthroughs in federal whistleblower law. Under the Dodd-Frank Act, whistleblowers can file anonymous cases, and everything about their case, including who they sued, remains secret. Our whistleblowers have prevailed in significant cases, including one of the largest SEC awards granted to date. To maintain the secrecy of this whistleblower, we can only report that he or she obtained a reward within the top-five ever given by the SEC – a whistleblower informant award of over $30 million. Bradley Birkenfeld broke the back of Swiss bank secrecy. He was the first Swiss banker to file a case under the IRS whistleblower law. The results were unprecedented. UBS bank (at the time the largest bank in the world) had to pay a fine of $780 million. They also had to close all known U.S. accounts, and for the first time in history, the bank turned over the names of 4450 U.S. taxpayers for prosecution in the United States. Mr. Birkenfeld obtained one of the largest ever individual qui tam IRS whistleblower awards in history of $104 million. But this was just the beginning. In a major law review article, the Chairman of the IRS Advisory Council explained how Birkenfeld’s whistleblowing ended illegal Swiss banking for most Americans, led to the closure of tens of thousands of offshore accounts, and the collection of tens of billions of dollars from tax law violators. Daniel Richardson is a former Senior District Business Manager for Bristol-Myers Squibb (BMS). Richardson prevailed in one of the largest qui tam whistleblower cases filed against a major pharmaceutical company for “off label” marketing and illegal kickbacks. Richardson, in conjunction with other whistleblowers, held BMS accountable under the False Claims Act.

Based on frauds primarily related to federal and state Medicare and Medicaid programs, the company had to pay $515 million in fines and penalties. The whistleblowers, including Mr. Richardson, obtained their mandatory qui tam whistleblower rewards, once again demonstrating how the whistleblower reward laws are the most powerful tool for holding fraudsters accountable. Alex Chepurko was just 21 years old when he faced off against a $100 million nationwide criminal enterprise. The first whistleblower to simultaneously file claims under the qui tam provisions of the False Claims Act, Dodd-Frank Act, and IRS whistleblower law, the lead prosecutor called him “the hero” for documenting numerous criminal violations.

In April 2020, Chepurko obtained a $69.6 million judgment on behalf of the United States under the False Claims Act. His claim to obtain a whistleblower award from the Government is still pending.  In 2018, CBS TV profiled his case in their show Whistleblower. A husband and wife team, Whistleblowers’ 21276 and 77, played the leading roles in a high-stakes confidential “sting” operation against a sophisticated international criminal enterprise that managed over $1.2 billion in offshore “secret accounts.” Based on the whistleblowers’ undercover activities, the fraudsters were criminally convicted and paid $74 million in fines and penalties. The case set the national precedent covering tax whistleblowers whose work with the Justice Department resulted in criminal convictions. After two significant victories in Tax Court, the whistleblowers obtained $17.4 million in whistleblower rewards.